New figures requested from the Office for National Statistics by Jelf International reveal the countries with the largest numbers of employees working for a UK-controlled parent company (known as UKFAs or UK foreign affiliates).

Overall, the number of employees working in a UKFA for the latest reporting period* has increased by more than 13 per cent from 4.39 million to 4.98 million.

Countries with highest numbers of employees working in UKFAs: 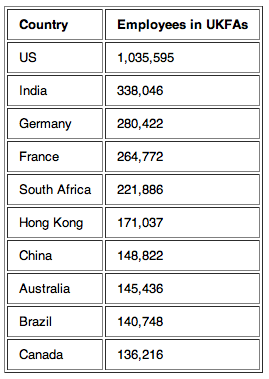 However, the countries with the largest growth in employees working in a UKFA are rather different: 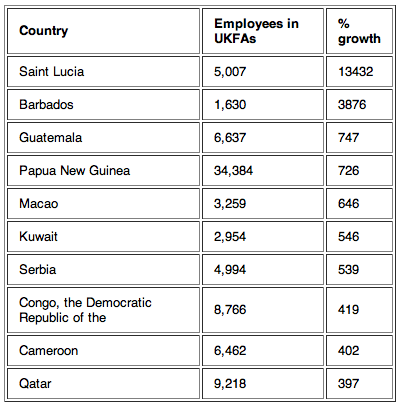 Doug Rice, managing director of Jelf International, said: “The list of countries with the highest numbers of employees working for UK foreign affiliates doesn’t contain many surprises. Most business are set up in countries where the UK currently or previously has had strong ties and where language and culture are similar — so traditionally this is Europe, the Commonwealth and G7 nations. One exception to this rule is Brazil, but an explanation can be found in the fact that the reporting period was just prior to the World Cup.

“The high-growth countries present a completely different picture to the high-volume list and show the huge reach of UK companies around the globe. Many of these countries are economically developing rather than developed and as such their healthcare infrastructure is not on a par with the UK.

“Any company considering expanding overseas needs to take their employer duty of care extremely seriously when it comes to international private medical insurance. A routine treatment for a member of staff can be extremely expensive for a company to cover if it is paid for on a treatment-by-treatment basis, which is why many countries will not admit foreign workers without appropriate healthcare cover.”

Jelf International understands that ensuring international healthcare insurance is appropriate, meets the employer’s duty of care and doesn’t blow the budget can be tricky to get right. The employee benefits consultancy believes many companies employ what they believe to be a common-sense approach, applying the same rules for employee health insurance for staff in multiple destinations. It’s only when a policy is actually needed that the problems with this approach become evident: if a policy isn’t adequate, it is not only the cost to the individual or company that becomes an issue but it’s also the quality of the healthcare and the ability to be repatriated if necessary.

Rice said: “This is an extremely fast-moving area — rules and regulations change all the time and so it is best to seek advice from an expert. Unfortunately for expanding businesses, simply applying common sense isn’t adequate. If an employee unexpectedly needs treatment, the employer may be left with huge bills that, condition dependent, can run in to hundreds of thousands of pounds.”

Other findings from the ONS UKFA data:

Tata Steel staff to be balloted on pensions strike action

19% want next government to take action on wellbeing

Is the growth in group risk cover enough?